KDE produces literally dozens of apps for work, play, education, and creativity. Kontact, for example, gives you control over all your email, contact, and agenda; Itinerary keeps you up to date with everything you need regarding your trips; the KAlgebra graphing calculator works equally well on your desktop and your phone; Cantor provides you with an intuitive way of analyzing data and graphing the results; and Kdenlive makes cutting and building sophisticated-looking videos not only easy, but fun as well.

These are but a few of the apps releasing new updates today. When combined with the KDE’s powerful Plasma desktop, they provide you with most, if not all, the tools you need to be productive in a versatile and flexible Linux environment.

But you don’t even need to run Linux! Many of the apps in this announcement work on Windows, macOS, and Android as well. This is what convergent means for KDE: use your favorite apps anywhere, on any system, on your work computer, mobile or even on your TV!

And, remember: KDE’s apps, the Plasma desktop, Plasma Mobile, Plasma BigScreen and all the rest of KDE’s software are free and open source. No licensing, no hidden costs, no spying. Share them with your friends, install them at work, or use them in your school lab. It is your software to enjoy where and how you want.

Read on and discover everything that’s new in the world of KDE apps:

Kontact, gives you control over all your emails, address book, and daily schedule. Set up a meeting and let Kontact’s calendar send out invitations and alert attendees when the time or day changes. Kontact’s smart backend will keep track of who writes to you, even if you don’t add them to your address book. When you want to write back, they will be there, at your fingertips. 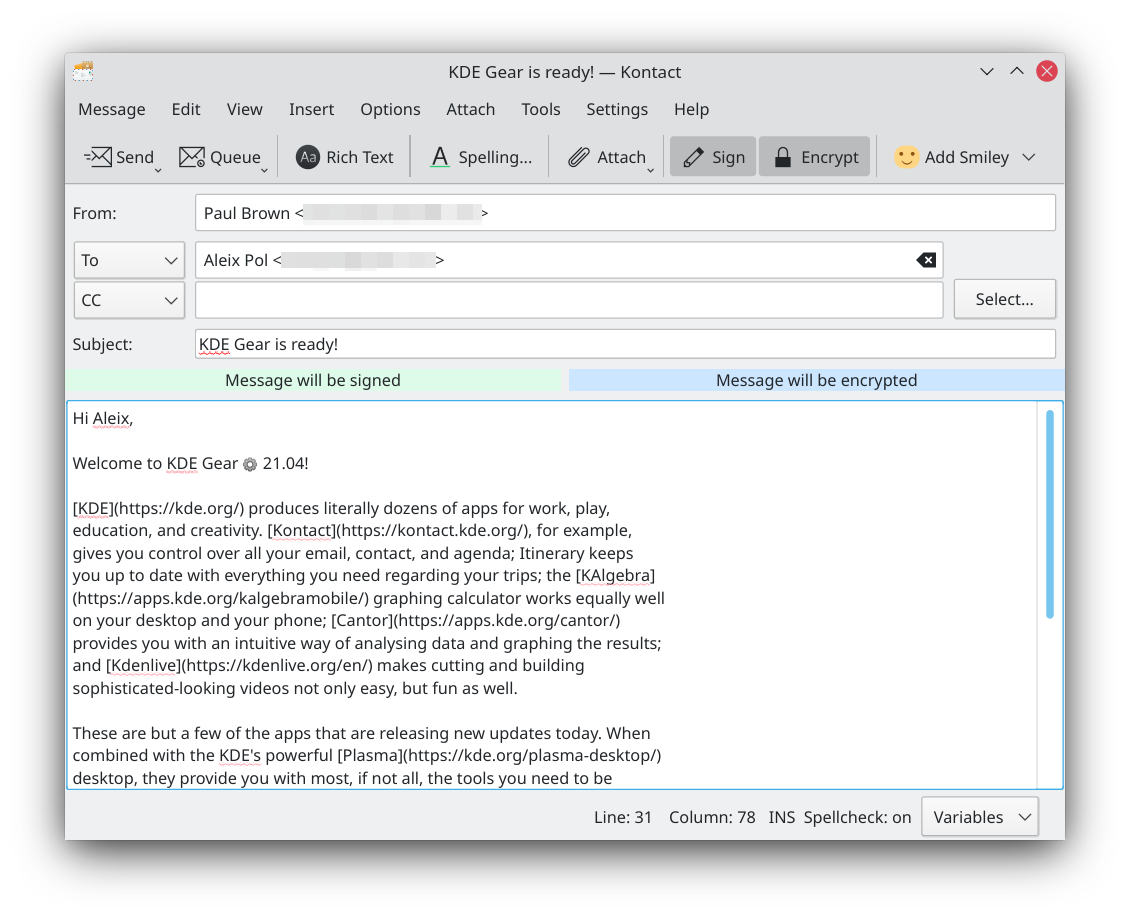 Your privacy is among the main concerns of Kontact’s creators. Encrypting email so third parties cannot spy on you is one of the best ways of keeping your personal information safe. But making encryption hard to use will mean that most users will just not bother. By supporting Autocrypt, a new feature in Kontact, you get the best of both worlds: safety and convenience. 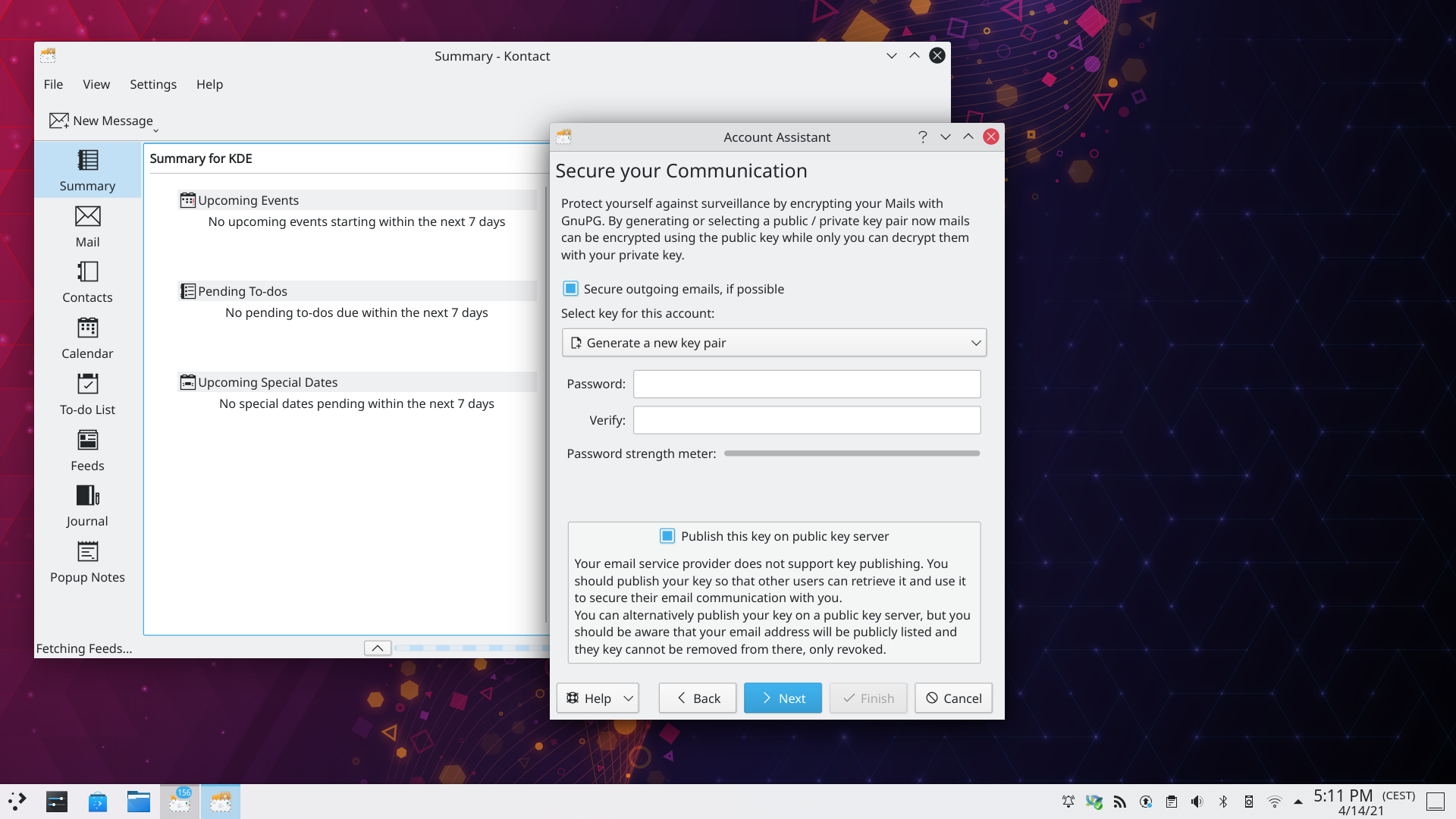 Another feature designed to keep you safe is that now you have more control over what you download when checking your messages. Although Linux is pretty resistant to viruses, you will always want to be careful, and you never know how much information you are revealing to a third party just by loading an embedded image in an email.

In the design department, Kontact developers have improved the look and feel of all the suite, making using the calendars smoother, the security friendlier, and the contacts in your address book easier to manage.

Kontact will have no problems working with your existing groupware service, as it supports Gmail, Outlook, and all POP and IMAP-based services.

Itinerary is an app that will make your traveling easier and more pleasurable. It works well with Kontact, as it can draw information from your communications with the travel company to help you plan your trips. That said, it can also work as an independent application.

KDE Itinerary is a bit of a newcomer to the KDE catalog, as it was started a little over three years ago. However, it has already collected an impressive amount of features. Apart from the basic timetables, locations and changes of schedules of your chosen means of transport, Itinerary can provide you with information regarding accessibility in stations and airports, and even tell you what amenities will be open, allowing you to plan your meals while en-route. This new version includes the real time status for elevators and escalators in the train station map view, for example, and can evaluate OpenStreetMap opening hours expressions. It also includes a feature that allows you to distinguish between dock-based and floating rental bikes. 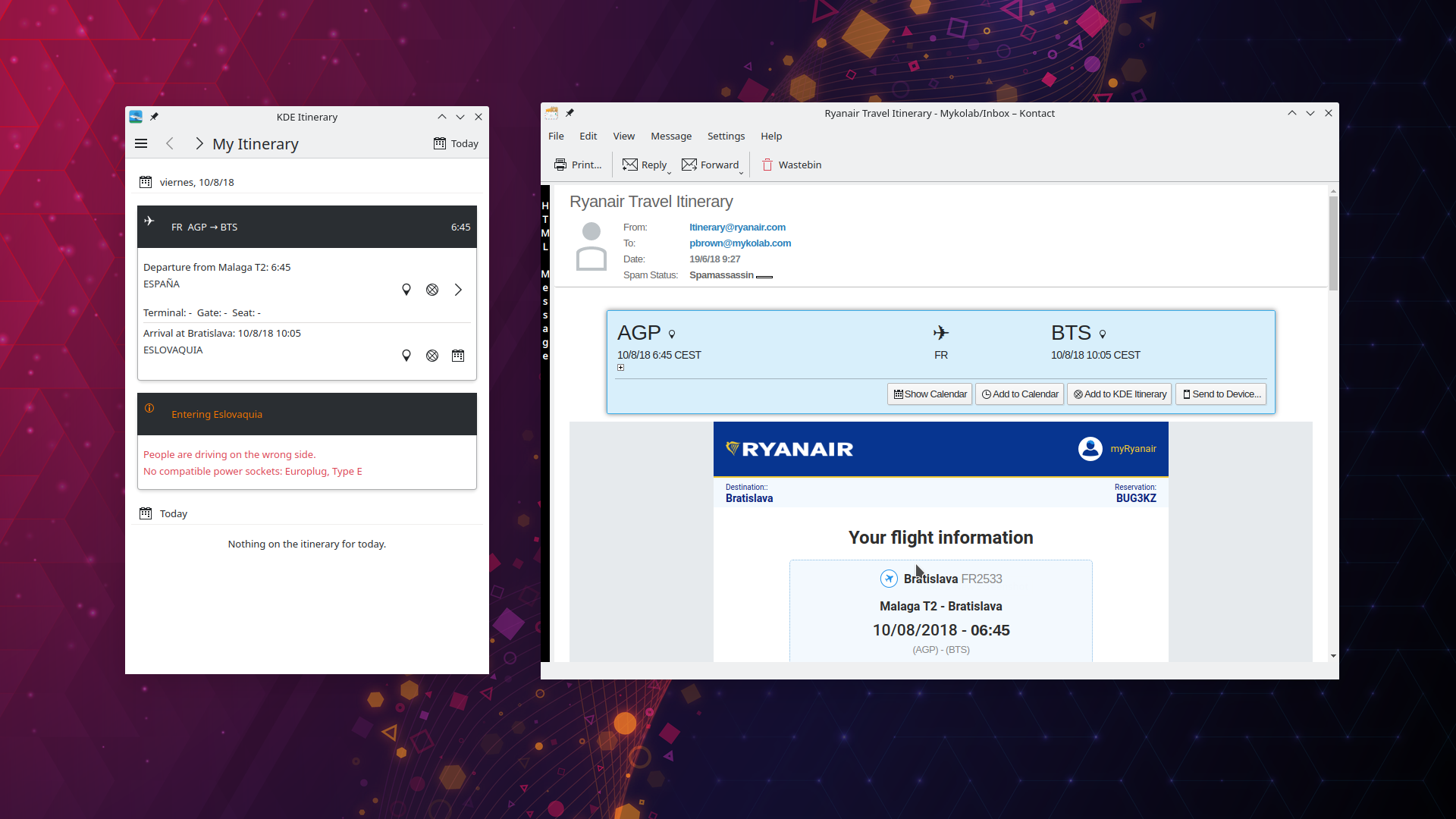 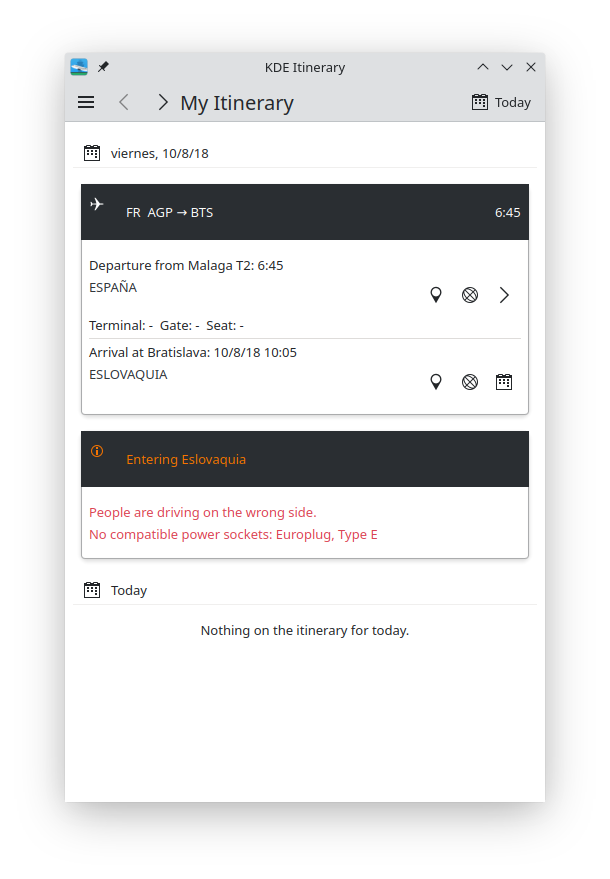 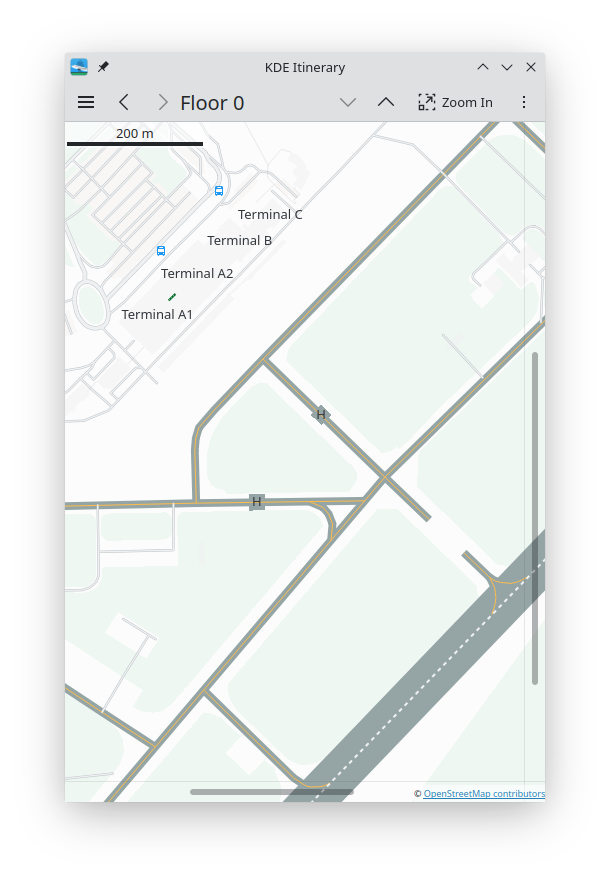 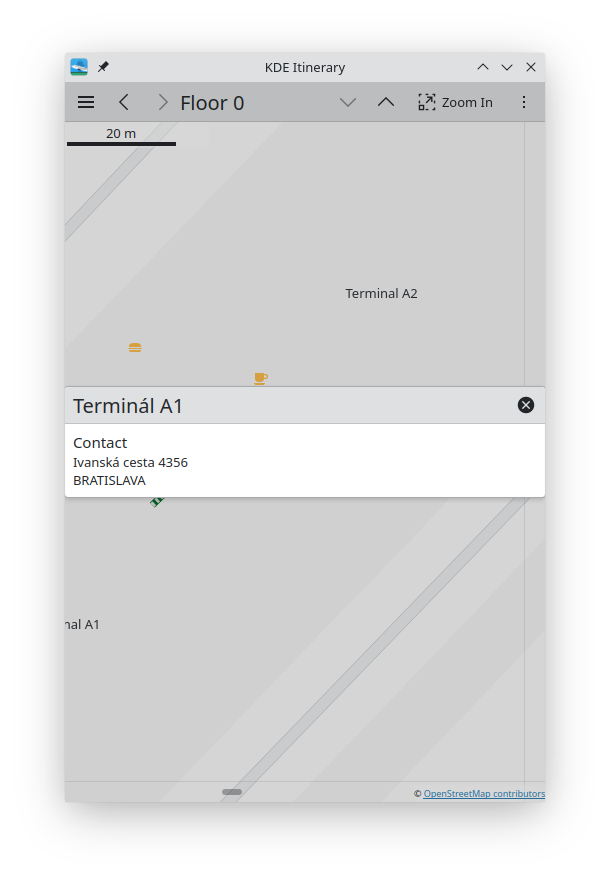 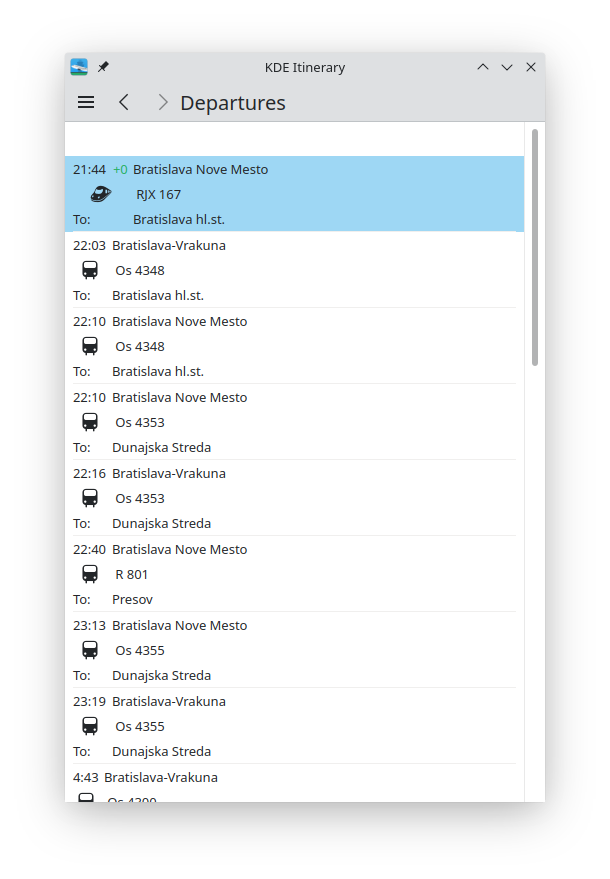 Dolphin is the gateway into your files and folders. With Dolphin, you can explore, search, move, copy and open all the stuff in your hard disk and pen drives. You can also visit remote machines and work with the files stored on them as if they were part of your local file system. This includes stuff stored on cloud services like Google Drive, Nextcloud and Dropbox. 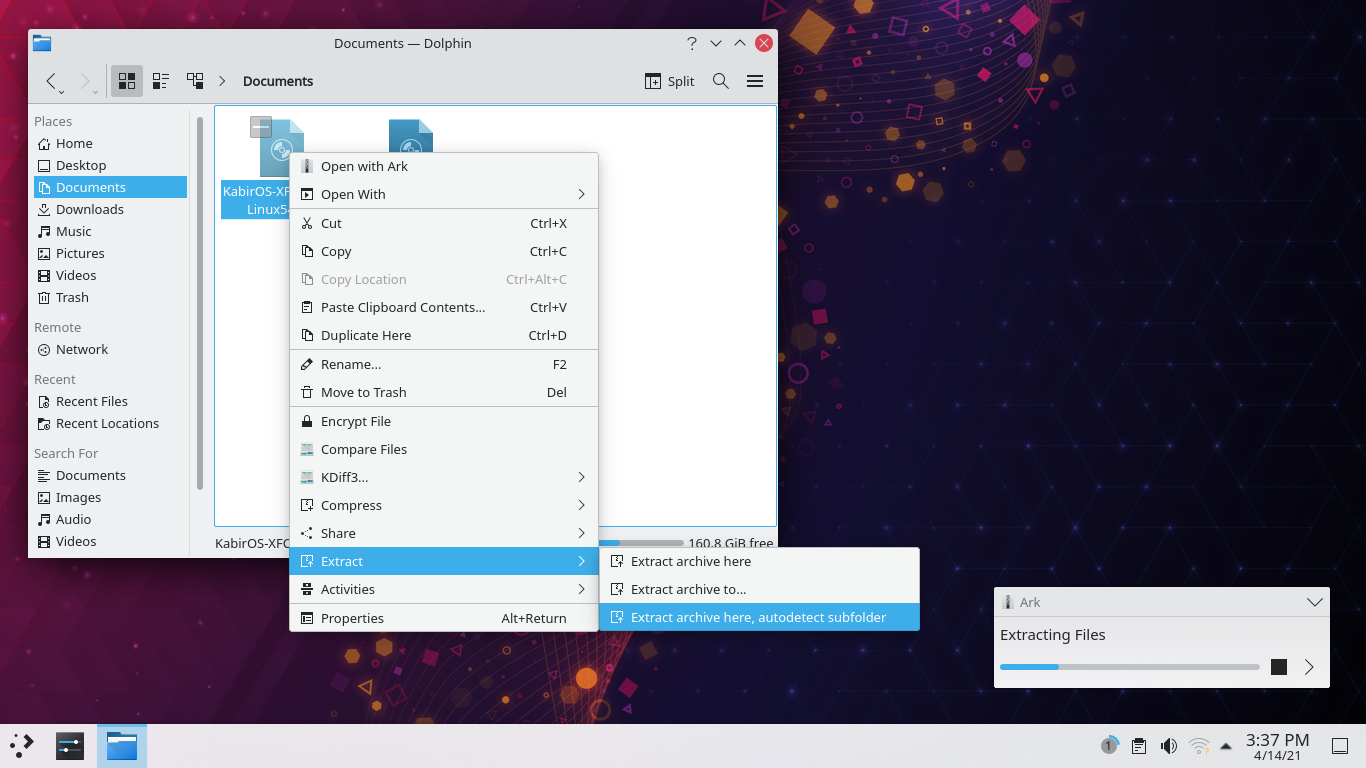 Another thing you can explore with Dolphin are compressed archives: click on a zip or tar.gz archive, and you can navigate it as if it were a folder, picking and choosing what items to copy out and decompress. In the version released today, Dolphin now lets you decompress multiple archive files all at the same time. Select all the compressed archives you want to unpack, right-click on one of them and then pick Extract from the menu that pops up.

In the usability department, Dolphin now smoothly animates how icons are rearranged when you split the viewing area or resize the window. You can also pick whether newly-opened tabs will go at the end of the tab bar, or after the current tab. Talking of tabs, if you hold down your Ctrl key and click on an entry in the Places pane, it will open in a new tab.

Always thinking of your convenience, the new version of Dolphin lets you modify the entries in the context menu, so you can remove items you never ever use. If you can’t find an option, you can always resort to the hamburger menu in the upper right-hand corner of Dolphin: click on it, and it will unfold a comprehensive list of options and settings. 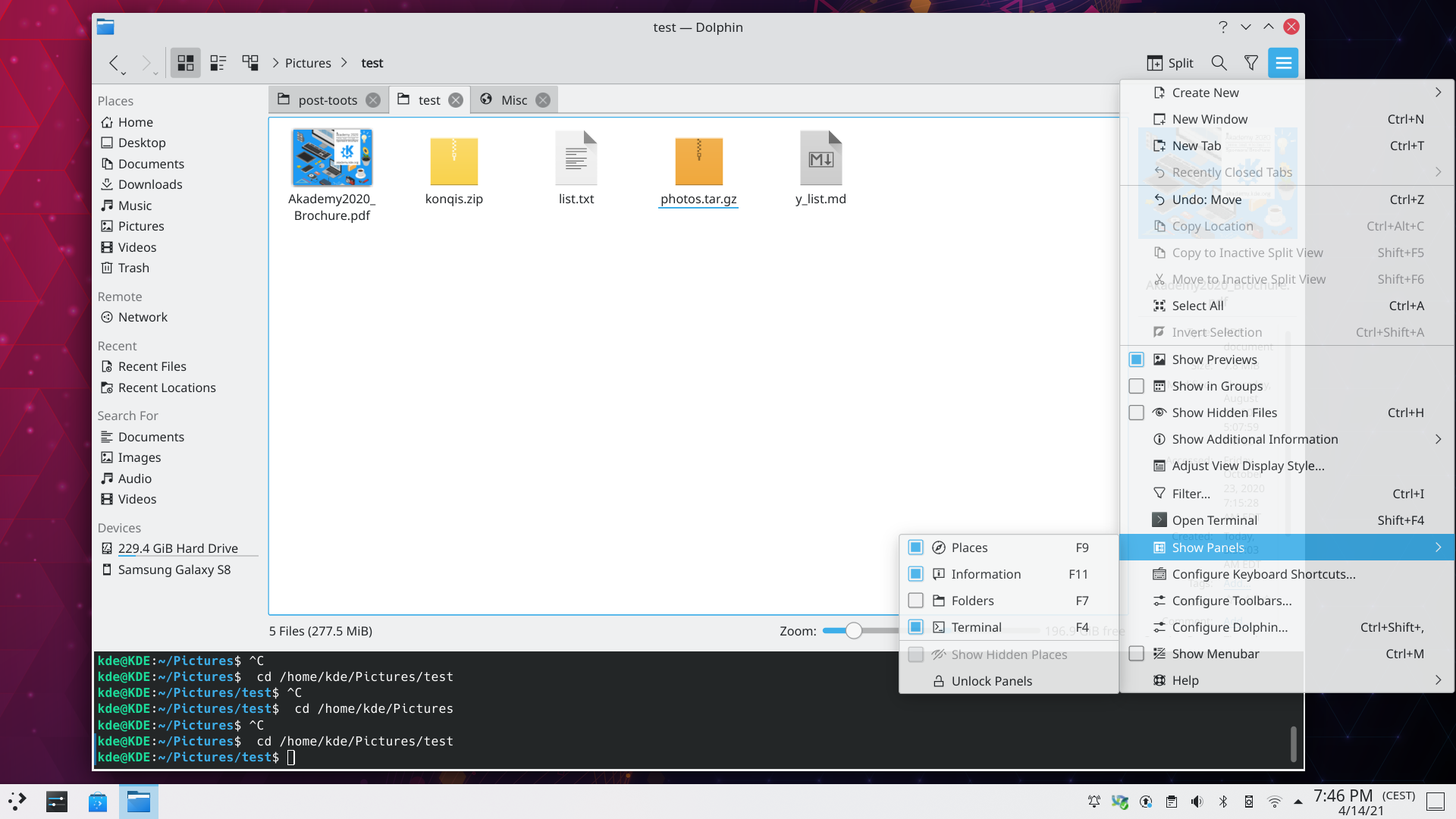 Developers will love that Dolphin works great with Git, Mercurial and Subversion repositories. Dolphin gives you pop menu options to add and remove files to your commits, revert changes, as well as showing your repo’s logs. It also visually displays the state for your files, whether they are pending, which have been committed and which pushed. The new release includes detection of the working copy root of your repo for all the systems mentioned above.

Elisa is quickly becoming a favorite among KDE music lovers. Its straightforward and attractive looks now come with a full mobile makeover, pushing it to first-class citizenship status on Android and Plasma Mobile. 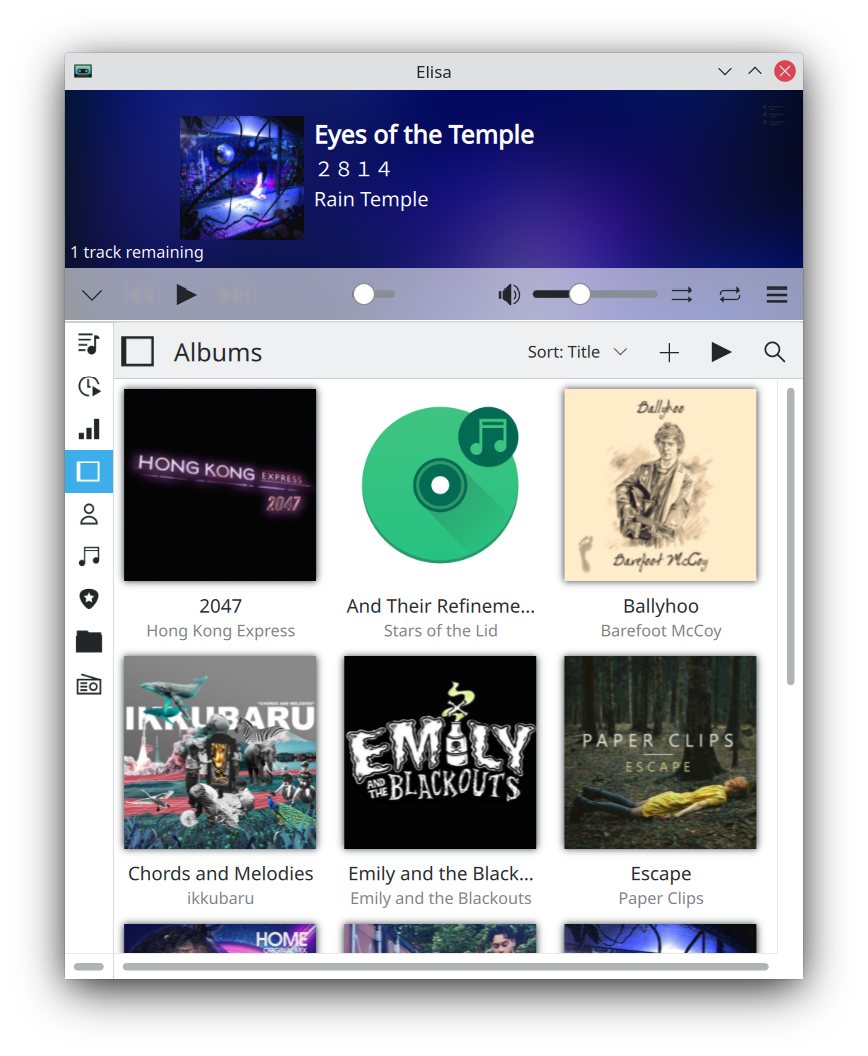 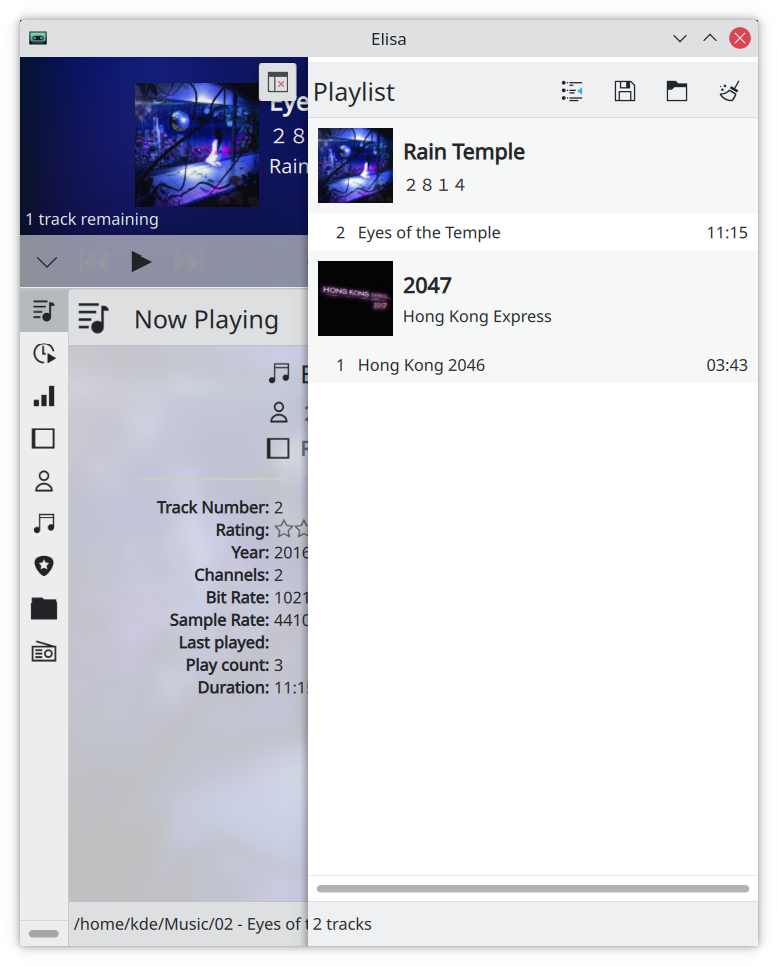 Apart from all the formats it could already play, in this release Elisa can also play AAC files and use playlist files in the .m3u8 format. This means you can use non-western alphabets, accents, Cyrillic, Arabic, Urdu, Hindi, Chinese or any other scripture for song titles, artists and albums.

But that doesn’t mean Elisa has become clunkier. Quite the contrary: the new version released with KDE Gear today actually consumes less memory when you scroll around the app, making it snappy and a joy to use.

One of the best players for your desktop or phone.

in no time. Kdenlive is the most powerful Free Software video editor out there, and it just keeps on getting better. Need stock footage for your documentary? Check out the Online Resources panel and browse for video and audio clips and still images from Pixabay, Archive.org and Pexels. Want to reach a wider audience? Add subtitles! You will make it easier for people from other countries, and you will also help those with hearing problems. The in-built subtitle tool allows you to add captions directly from within Kdenlive or import them from another program. Not only that, but you can also configure Kdenlive with a nifty speech-to-text module which will identify speech on audio tracks and translate them to subtitles automatically for you. 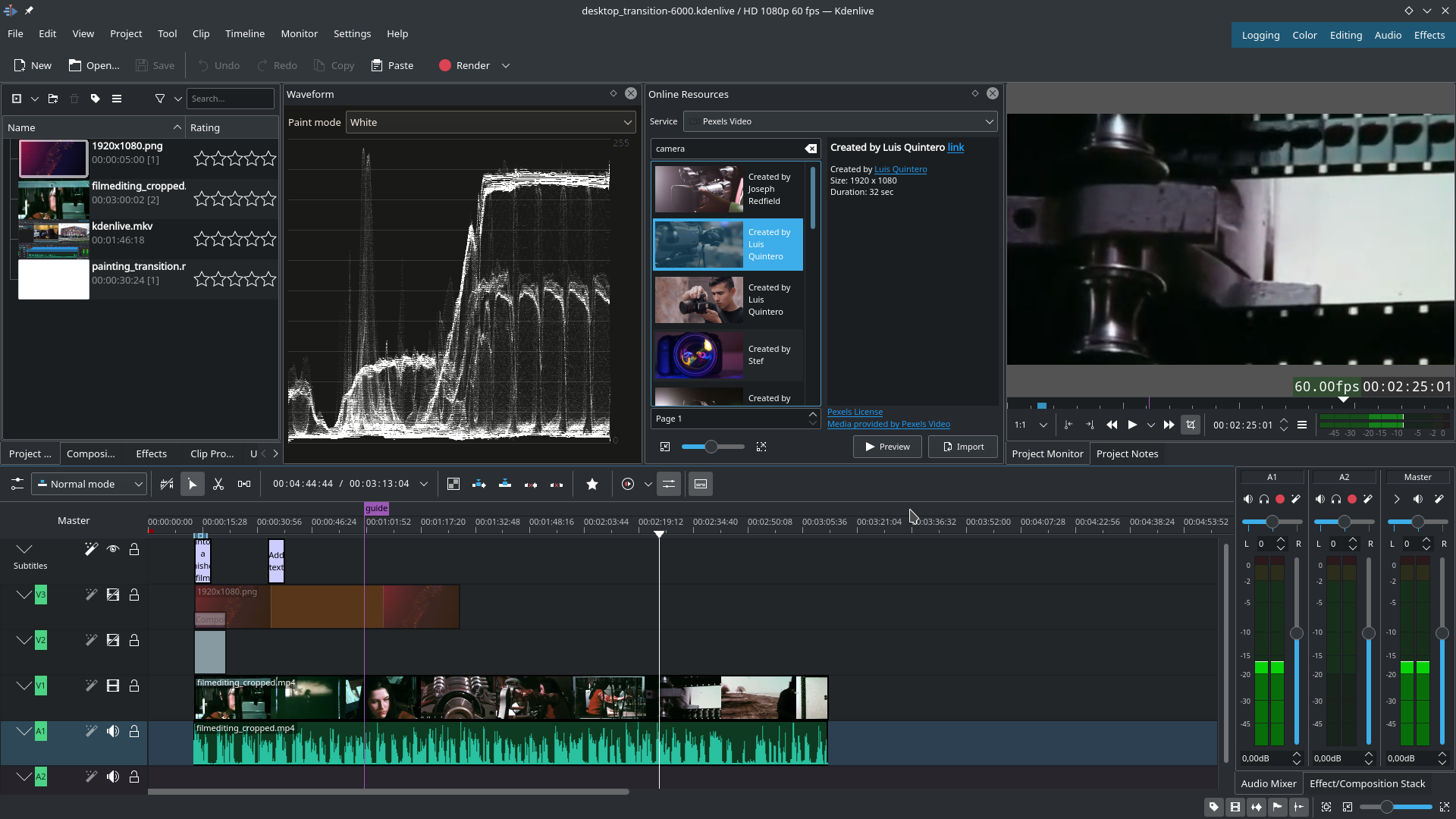 Apart from new features, Kdenlive becomes easier to use with every new version. It was already easy to pan and zoom around the tracks using the mouse and different key combinations, but now… Did you notice that the horizontal scrollbar has handles on each end? When you click, hold and pull them, you can adjust the zoom on the tracks to what you are most comfortable with. According to the developers, zoombars, as they have been called, will soon be available on the vertical scrollbar too, and you will be able to use them to smoothly adjust the height of tracks. 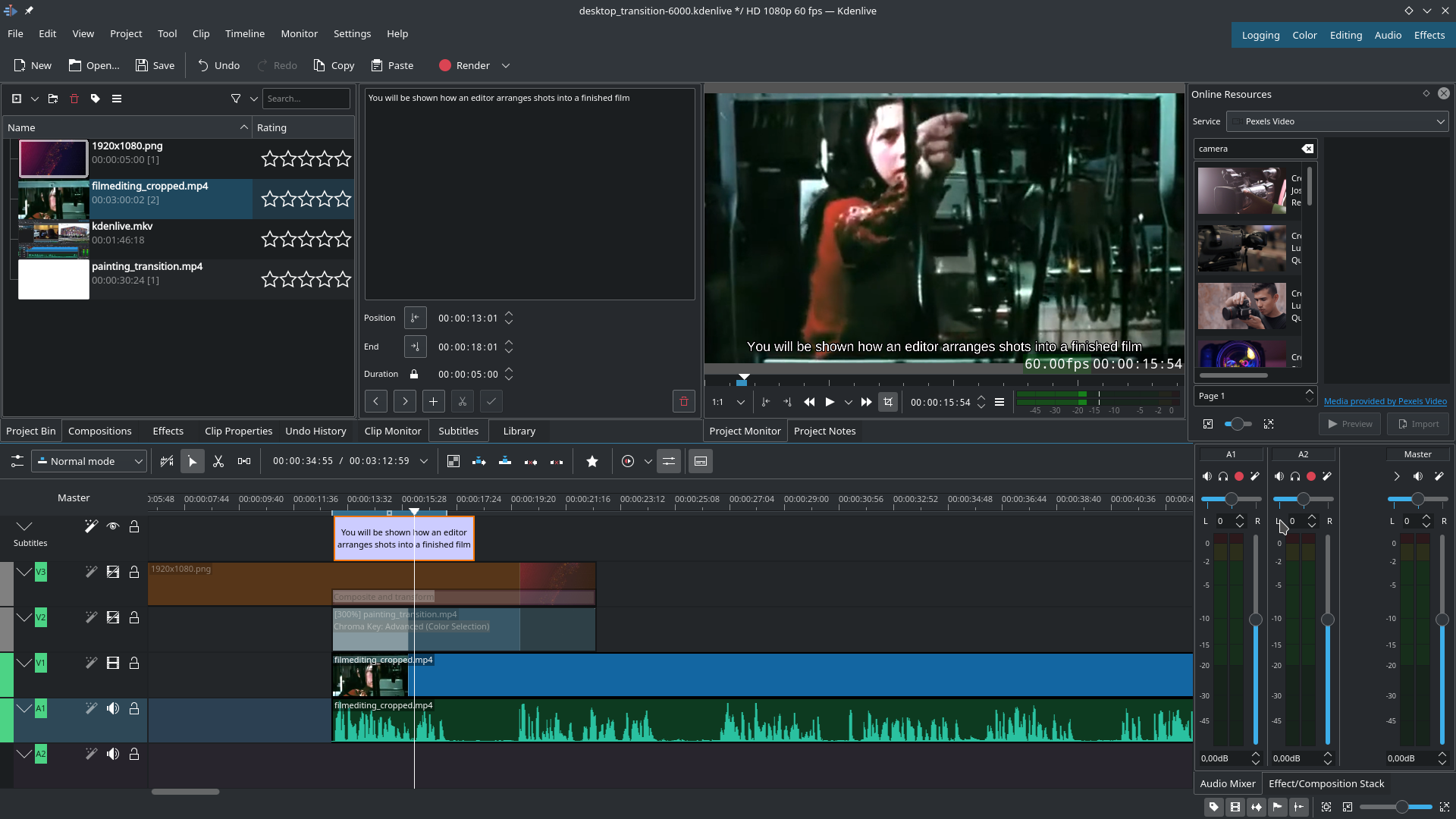 Finally, Kdenlive now supports the AV1 video coding format, a cutting edge format already being used by the likes of YouTube and Netflix.

Unleash your internal Nolan and get to grips with Kdenlive now!

Graphical applications are great, but sometimes you just need a good, old-fashioned terminal to get things done. Well, congratulations, because Konsole is two of those things: it is a terminal, and it is good… But it is far from old-fashioned.

Konsole includes very sophisticated features, like panes that can be split vertically or horizontally. Drag them around with the cursor to place them, and even synchronize them, so instructions written in one pane, will show up and run in others at the same time. Besides, when you resize panes, now the text on display reflows, adapting to the new size.

The barriers between text interface and graphical applications blur and disappear with Konsole. Not only is Konsole built into other KDE applications like Kate or Dolphin for your convenience, but, hover your cursor over an image file, and a preview will pop up. Hover it over a folder and preview of its contents will appear. Right-clicking on a file’s name will bring up a menu that, among other things, will let you chose the application you can use to open it. Holding down the Ctrl key and clicking on a file, will open it in a graphical application (for example, images will usually open in Gwenview and folders open in Dolphin). In the latest version, Konsole even lets you choose which editor to open when you Ctrl + click on a text file.

This is but a small sample of the things Konsole can do, making it truly a terminal emulator for the 21st century. Regardless of whether you are a veteran or a novice in command line matters, Konsole will give you all the features you need for your shell-based tasks. 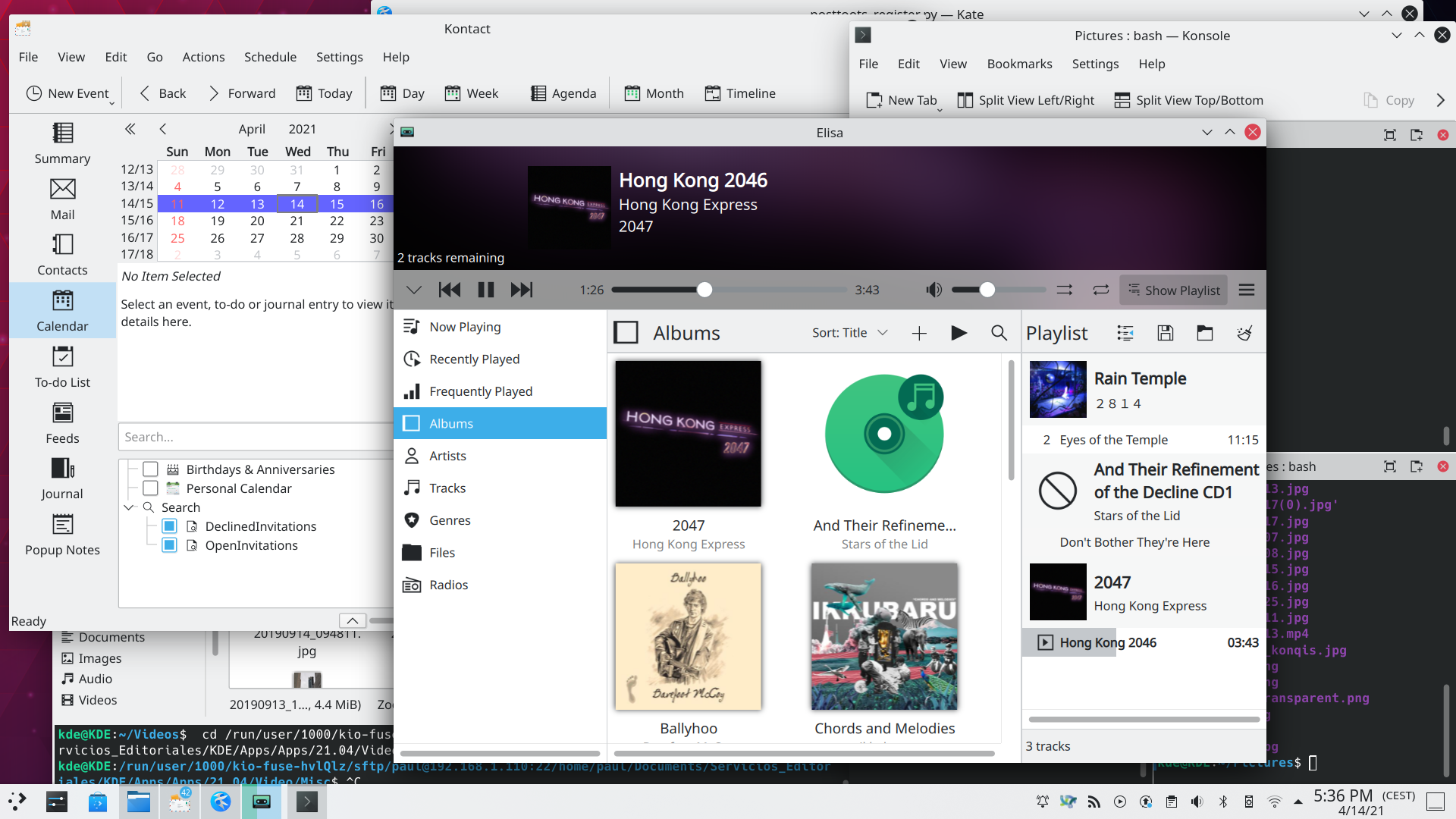 KDE is All About the Apps

One of the Goals of KDE is to be All About the Apps which means updating our practices to take charge of releasing our own software. KDE Gear 21.04 apps will shortly be updated on these two Linux app stores.

If you’d like to help get more apps into the apps stores, support more app stores and get the apps better integrated into our development process, come say hi in our All About the Apps chat room.

The complete source code for KDE Gear may be freely downloaded. Instructions on compiling and installing are available from the KDE Gear 21.04.0 Info Page.

KDE is an international technology team that creates free and open source software for desktop and portable computing. Among KDE’s products are a modern desktop system for Linux and UNIX platforms, comprehensive office productivity and groupware suites and hundreds of software titles in many categories including Internet and web applications, multimedia, entertainment, educational, graphics and software development. KDE software is translated into more than 60 languages and is built with ease of use and modern accessibility principles in mind. KDE’s full-featured applications run natively on Linux, BSD, Solaris, Windows and Mac OS X.